Currently there are three main technologies that managers use to view Kronos Workforce Central (WFC) pages through a web browser: HTML, Java, and Adobe Flash (Navigator and NGUI).

For Workforce HR, ActiveX is also a technology (only applicable if Kronos Workforce HR is installed), but for WFC managers, Java is the most important. It has the richest functionality and has been the primary development platform of Kronos. Even with Navigator, Workforce Genies™ are only accessible via Java.

Depending upon your server setup you can be accessing WFC with Java in one of two ways: on the PC that is in front of you or remotely connected to a web browser on a different server (e.g. Citrix).

What version of the Java client do I use for Kronos?

When I log in to WFC, I am shown the Kronos QuickFind Genie in the screenshot after Java client loads, but you might see a different screen. Seeing QuickFind tells me I logged into Kronos successfully and Java loaded successfully.

Remember, a WFC Manager cannot use Genies without the Java client (among other things such as Reports and Event Manager). The Java client (a.k.a. plug-in) version is visible by right clicking on the coffee cup (in the lower right hand corner of the desktop). The Java version also might be visible through your Microsoft Window’s control panel (if your IT Administrator provided access to control panel).

If your company uses Citrix for Kronos, you might not have access to the control panel to check the Java version. In this example, my Java version is 1.6.0_37 (also simply: Version 6, Java version distributed by the WFC server (IT/Kronos Administrators)Update 37). 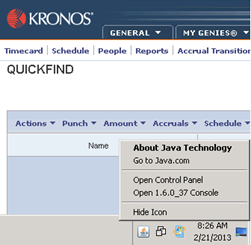 This is a screenshot taken when accessing WFC 6.3. If you are using WFC 6.2, you might see Version 6, Update 17. Another way of checking the Java version is by using this version check on Oracle’s site.

NOTE: When I viewed this site last, it asked if I would like to download a later version. In most cases this is not necessary. Due to the possibility of version conflicts, typically you do NOT want to do this and use what is currently installed and tested with Kronos. Kronos installations that have many managers typically have one specific Java client version that is supplied either through Kronos or by IT. Keep in mind as well that Kronos Workforce Central might not be the only production software application in your organization that uses Java technology.

For those technical administrators of WFC, the Java client that is first installed upon first access to WFC can be accessed via WFC Setup -> System Settings -> Java Plug-In Settings. NOTE: Some administrators choose to distribute Java via other means, so you might see the bottom option (ending in “autodownload. enabled”) set to “false”.

That option determines if the Java version located in the plugins directory will be distributed from WFC on first access. The version is part of the file name. For detailed information on other System Setting options, reference the Workforce Central System Administrator’s Guide or the on-line help.

For Java version conflicts when using Kronos, check the Kronos customer site for any Technical Advisories.

We are upgrading Kronos, will the Java version change?

It depends on the version you are upgrading from. If you are just applying a service pack then the answer is no. With a new service pack, Kronos may provide compatibility with a later Java client version.

One factor IT often has to consider when upgrading is testing the latest Java client version against the later WFC version. For more information on Java version compatibility when upgrading, search for “compatibility matrix” from the Kronos customer site (supersearch) or reference the Installation Planning Guide PDF document distributed with WFC 6.3.

So Much Technology, So Little Time.

We are experts of blending technology at Improv and are here to help.

Reach out for a free assessment today!

Is Your Company Suffering from an Integration Deficit?

May 20 Webinar: How to Create Business Structures in UKG Dimensions